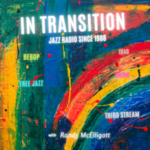 Vocalist Michael Franks has been around long enough to have influenced a slew of musicians. Not only other vocalists but musicians as well. On this episode I am featuring mostly recordings from the 1970’s and 1980’s. His voice is smooth and sultry but more importantly, inviting. When we listen to smooth jazz vocals these days, Michael Franks was a big part of setting the stage for a form of vocalizing that is still popular today. Another person who comes to mind is vocalist Al Jareau.
When I was going to university in Montreal back in the 1970’s, there was a sax player by the name of Bob Mover. One night at one of the university party’s held in the cafeteria, Bob Mover was the musical entertainment. What a discovery. He could really play his ass off. Four tracks are featured on today’s episode that I hope will introduce his music to more people.
Other people featured on the show include influential pianist Bill Evans, sax player Brew Moore, as well as guitarist John Scofield among others.